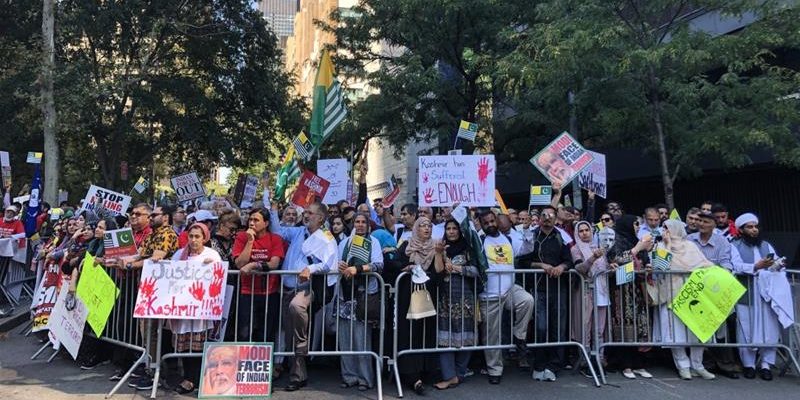 New York, US – Gurpatwant Singh Pannun still has vivid memories of the summer of 1984. A teenager at the time, he remembers security forces taking boys from his village in Punjab in the aftermath of a deadly Indian army operation in the Golden Temple, the holiest of Sikh shrines.

On Friday, Pannun, a lawyer in New York, stood outside the United Nations alongside thousands of protesters to rally for human rights in Kashmir as Indian Prime Minister Narendra Modi delivered his speech at the world body’s General Assembly (UNGA).

Pannun, along with others in the Sikh community, argues the violence against them in 1984 by the Indian forces mirror the current crisis in Indian-administered Kashmir where a lockdown has been in place for almost two months following the Indian government’s decision to scrap a constitutional provision that gave special rights and a degree of autonomy to the Muslim-majority state.

That is why, Pannun says, he is helping sue Modi over alleged human rights violations in Kashmir. Earlier this month, a group called Kashmir Khalistan Referendum Front – of which Pannun is a spokesperson – filed a lawsuit in Houston before the Indian prime minister’s arrival to the Texan city to address a rally dubbed Howdy Modi.

“The lawsuit is based on a specific US federal law, which is called Torture Victims Protection [Act] – any official, under the official capacity, if they’re involved in or have commanded extrajudicial torture, they can be held accountable if they’re found in this particular jurisdiction,” Pannun said.

New Delhi has defended the cancellation of Kashmir’s special rights as a way to free the region from separatism and help its economy grow faster. Before the controversial August 5 move to scrap Article 370 of the constitution, the government imposed a communications blackout and deployed thousands of extra troops to the disputed territory.

Referring to the reports of mass arrests and alleged torture since then, Arjun Sethi, an American Sikh human rights lawyer and law professor in Washington, DC, said that “a lot of the atrocities that we’re seeing happening in Kashmir today also took place in Punjab throughout the 1980s and 1990s.