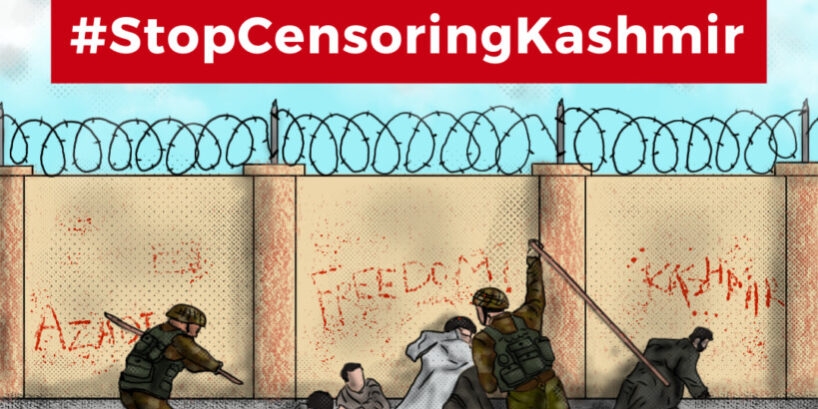 In Indian occupied Kashmir, the media has been under fire for the past several years. In addition to the Indian government’s control of the communication process, the unwanted and uncalled for curbs on media such as surveillance, formal/informal investigations, harassment, intimidation, restrictions in all the processes of news-gathering have hugely hampered the journalistic activities in the region besides undermining the role of free media.

With these restrictions in place, the free media in occupied Kashmir was rendered toothless and practically dysfunctional in the sense that they were totally unable to report the truth. Rather than debating the most pressing issues newspapers published from Kashmir valley were deprived of the editorial voice. Prominent writers and regular columnists who have written consistently on the Kashmir issue were completely silenced. The Indian state directly pressured local print and news media to blackout stories related to the police, army, and paramilitary’s use of disproportionate force on protestors, and curbs on freedoms of expression and speech.

This forced silence created a sort of vacuum that was later on filled by the social media, which provided marginalized Kashmiris the access and space denied to them in the mainstream media. Educated youth within and outside Kashmir found it a unique opportunity to engage themselves with digital platforms to counter India’s concocted and baseless narratives on Kashmir.

Unfortunately, in the aftermath of 5th August 2019, the Kashmiri social media users within and outside Kashmir were denied and deprived of the right of expression of their voices in the digital platforms-the only space wherein Kashmiris felt free to express themselves.

How Kashmiri voices were silenced across the social media, how marginalized Kashmiris were rendered voiceless and how the visibility of the Kashmir issue in the international arena was brutally suppressed, how Kashmiri users’ accounts were disabled, suspended, and permanently deleted/removed on flimsy grounds the Stand-with-Kashmir(SWK),a non-government non-profit organization based in New York in its recently released report uncovers the truth behind the digital siege and its devastating impacts on Kashmiris and the their case of the right to self-determination.

The first of its kind report also gives an in-depth insight into the profound harm that results when corporations impose digital silence on Kashmiris. It provides a comprehensive analysis of the methodology the Indian apartheid regime adapted to enable complete silence on Kashmir within the state of Jammu and Kashmir and beyond. It lays bare the nexus between the digital platforms and the Indian government and shows how social media corporations have worked hand in glove with the government of India in stifling of content and user profiles critiquing India’s authoritarian policies in Kashmir. And how social media corporations have violated their own publicly reiterated commitments towards the international standards of freedom of expression.

This report also breaks the myth of social media being an absolute defender of free speech, empowering the disenfranchised by handing them a global megaphone with which to speak directly to the world. Shedding the light on how social media was silencing Kashmiri voices, the report while citing the summer uprisings of 2008, 2009, 2010, and 2016 in Kashmir shows how the Indian autocratic government centralized information and made communications platforms to surveil Kashmiri social media users to ensure full control and censor of their speech.

Employing both qualitative and quantitative methods the Stand-With-Kashmir reports based on online polls, interviews, detailed survey tools created with a set of questions about the method of censorship employed by the platforms and pre-existing media reports, and human rights documentation of censorship experienced by Kashmiris in the digital space.   Based on these experiences the Stand-with-Kashmir team has been able to produce this comprehensive document that unveils digital platforms’ dubious and dodgy role they played to help the Indian fascist regime in curtailing the freedoms of speech and expression of Kashmiris and to suppress their political aspirations during the tumultuous period of time when the entire Kashmir valley was turned into an information black hole for the rest of world by imposing digital siege that lasted for more than 14 months.

Without mincing any words, the report says that corporations are siding with India’s suppression of Kashmiri digital rights, including the government’s blockade of internet and telecommunications access in the region, as well as its weaponization of the law and policy to curb expression of Kashmiri political aspirations in the digital space.

Shedding light on misuse of draconian Public Safety Act the report says that the lawless law has been used by the Indian authorities to detain Kashmiri journalists, lawyers, and political activists for speech labeled as “anti-national” since 2003.

Regarding the social media corporations’ claims and commitments to international standards of freedom of expression, the report says that the digital platforms have fallen short of their commitments in upholding and fulfilling their stated human rights obligations to people living in the world’s most militarized region (Kashmir).  About three prominent profiles censored by Facebook and Twitter include: SWK; Free Press Kashmir, a licensed news media organization based in Kashmir; and Kashmir Podcast run by Ifat Gazia, a Kashmiri graduate student at the University of Massachusetts, the report says that an analysis of the patterns of content removal and restrictions on these accounts, indicates multiple layers of online censorship directly enabled by the platforms.

“A common method of censorship involves the platform directly removing user content or restricting profiles at the behest of the Indian government, or in response to reports from other users”, the report further said.

Referring to a leaked internal review on the rise of online censorship the report reveals that the digital companies have been monitoring political speech globally, using a set of biased rules which favour governments and the far right. The Facebook rules, the report says, instruct moderators to censor content with the phrase “Free Kashmir “and deem content that calls for an independent Kashmir illegal in India.

At the same time, the report said, “Platforms have also chosen not to take steps to limit user-based manipulation by prominent troll accounts with documented links to the BJP government in power.  The report underlines the fact that social media platforms previously provided a rare opportunity for the Kashmiri people to voice their opinion without direct interference from Indian authorities, however, increasingly the platforms’ complicity with the Indian state has now impoverished this space not only in Kashmir but also for a new generation of Kashmiri activists in the United States as well as in the broader diaspora, thus enabling a blackout over Kashmir.

Social media corporations, the report added, have a special responsibility towards protecting the civil and political rights of people living in contexts of “heightened risk,” such as those living in Indian-occupied Kashmir. Urging social media corporations to take concrete steps to avoid causing or enabling human rights abuses and address human rights impacts of their operations in the conflict-hit region, the report said, “Social media corporations’ censorship of Kashmiris in the digital space at the behest of the Indian government is in violation of the UN Guiding Principles on Business and Human Rights (UNGPs)”.

“The failure of social media companies to take steps to stop Islamophobic and racist hate speech directed at Kashmiri Muslims also is in violation of the UNGPs”.

Since the report serves as a bill of indictment against social media giants’ destructive role in suppressing Kashmir related content in the digital space it is high time that these corporations must stop siding with India’s authoritarian regime and put an immediate end this illegal and immoral censorship to allow the voices of Kashmiri civil society organizations, advocacy groups, human rights defenders, journalists, and academics, to be heard worldwide freely without any restrictions.

It is worth mentioning Dr. Martin Luther King who once said, “Ultimate tragedy is not the oppression and suppression by the bad people but the silence over that by the good people”.