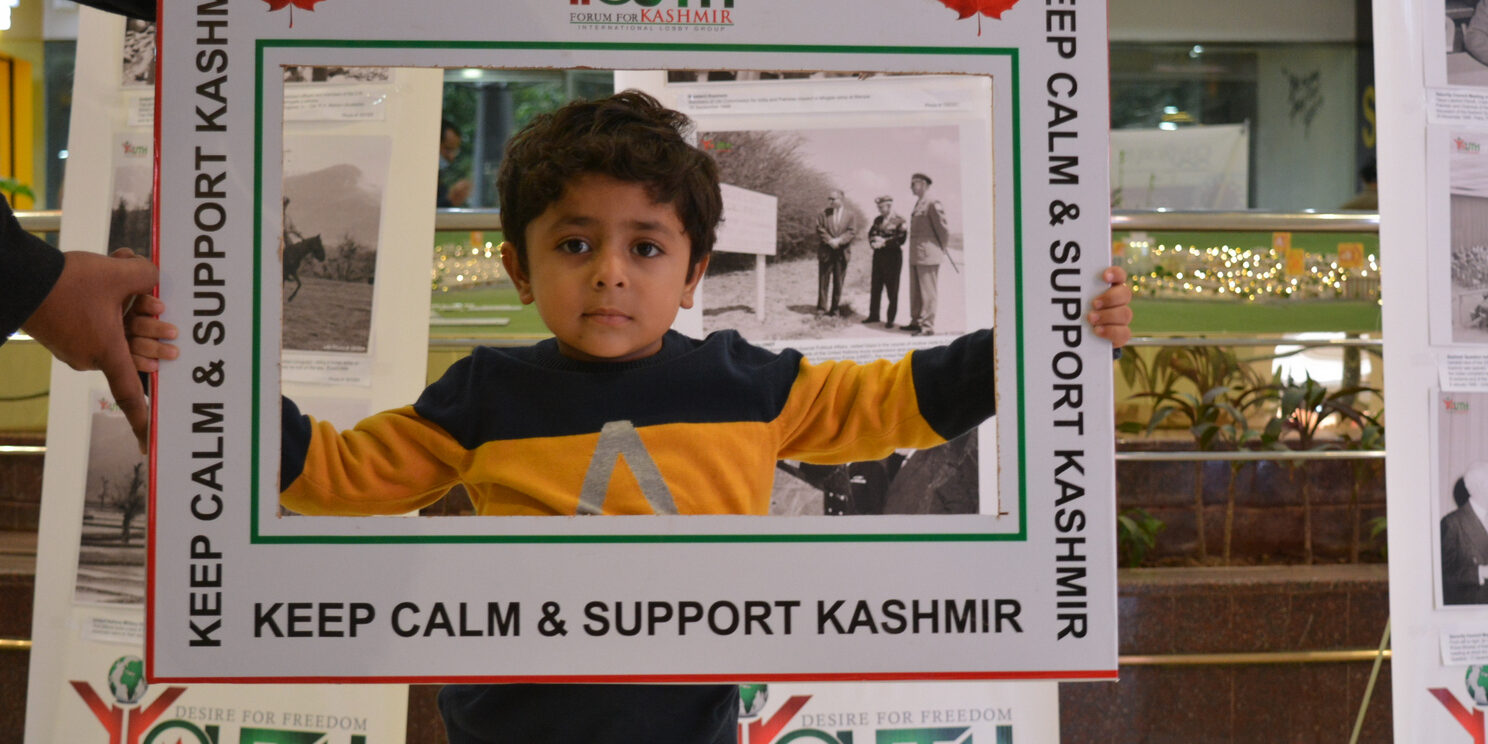 ISLAMABAD—An exhibit of rare pictures went on display in the Pakistani capital’s mega shopping mall on Tuesday to mark the 72nd anniversary of the UN resolution on Kashmir plebiscite.

The exhibit contains rare photos from the UN Library in New York City that depict the early years of international diplomacy on Kashmir.

The exhibit was organized by YFK–International Kashmir Lobby Group, an INGO working with the international community on conflict resolution and human rights.

One of the rare pictures in the exhibit show a Kashmiri official giving the UN Secretary General a flag of the free part of Kashmir–Azad Jammu & Kashmir, with signatures from Kashmiris requesting international help in liberating territories under Indian military occupation.

On 5 January, 1949, the UN Commission for India and Pakistan passed a resolution stipulating a UN-supervised referendum, or plebiscite in the resolution’s language, so citizens of the State of Jammu & Kashmir could decide to join either Pakistan or India. This requirement is pending mainly because of India’s invasion and annexation of Kashmir.

Mr. Ahmed Quraishi, Executive Director of YFK, said that Kashmiris and the world are coming closer to resolving Kashmir conflict.

“The year 2020 was a milestone in Kashmir freedom movement,” Quraishi said, adding, “India’s losses in Kashmir are increasing, not decreasing. And besides a referendum, the UN is also demanding now an international investigation mainly in Kashmiri territories under Indian control. The world media is covering the occupation today more than at any other time in seven decades. Kashmir will be free.”

MNA & Member Kashmir Committee Ms. Naureen Farouq Ibrahim joined the exhibition. She reiterated the need to remember the UN Resolution and emphasized national unity in standing with the cause. “Every word, every step and initiative we take, no matter how big or small in individual capacity can earn a positive impact on Kashmir’s stand,” she said. “Kashmiris are our brothers and sisters. We acknowledge the sacrifice given by them to get freedom and stand united with them, in every democratic struggle.”

On this occasion, The YFK;

●      Calls on New Delhi to meet international standards of justice and fair play by withdrawing the occupation army from Srinagar and all other Kashmiri cities.

●      Demands that India allow Kashmiris to take charge of their government as a first step towards resolving the international dispute in accordance with UNSC Resolutions.

●      Appeals to the European Parliament, the Shanghai Cooperation Organization, OSCE, ASEAN, SAARC, the Arab League, and the OIC to recognize the right of Kashmiri people to Self-Determination, and view it as the unfinished agenda of the freedom movement that led to the independence of both Pakistan and Indian in 1947 through a democratic and legal struggle where people voted to join either Pakistan or India after the departure of British forces from the region. India sought UN help in 1948, culminating in the UNCIP Resolution of January 5, 1949.

●      Reminds the world of the democratic nature of this Resolution. The first clause reads: ‘The question of the accession of the State of Jammu and Kashmir to India or Pakistan will be decided through the democratic method of a free and impartial plebiscite.’

●      Urges the United Nations Security Council to seize itself of the ongoing humanitarian crisis in Kashmir, where India’s military occupation authorities have been found involved in arbitrary and extrajudicial killings, enforced disappearances, denial of basic civil liberties, and the use of rape as a weapon of war. We urge that the world body should play its key role in resolving the Kashmir dispute for perpetual peace, progress and prosperity in South Asia.

Dr. Shireen Mazari meets relatives of Kashmiri political prisoner Asiya Andrabi
January 4, 2021
Go to Top
We use cookies to ensure that we give you the best experience on our website. If you continue to use this site we will assume that you are happy with it.OkPrivacy policy