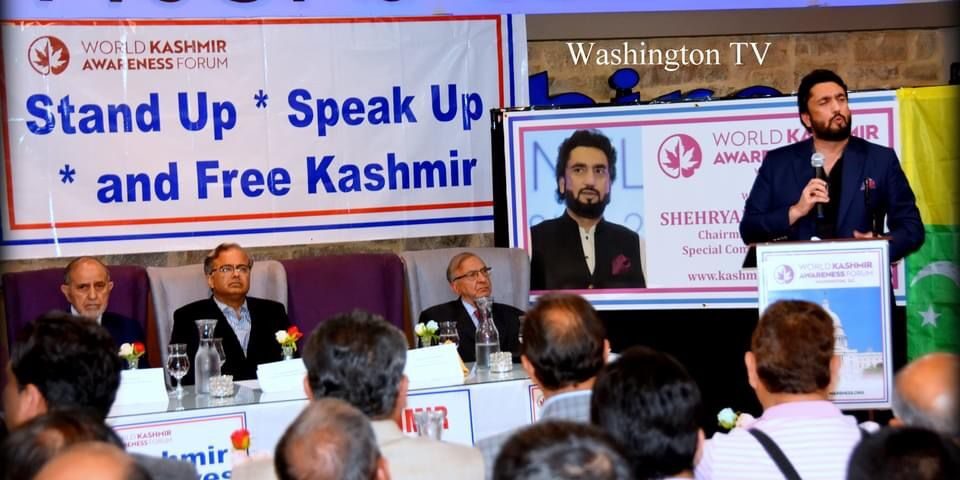 “The current resistance in Indian illegally occupied Jammu Kashmir (IIOJK)is rooted in the struggle of the people for the exercise of the right of self-determination – the promise which was given to them by the United Nations Security Council in 1948. While the people of IIOJK hold peaceful protests on the streets of Srinagar, Baramulla, Islamabad, Kupwara and elsewhere, Indian army has fired upon these peaceful protestors, killing more than 100,000 innocent civilians, including women and children since 1990,” this was stated by Shehryar Khan Afridi, Chairman, Parliamentary Special Committee on Kashmir at a reception given by Washington based World Kashmir Awareness Forum (WKAF) at Sapphire Tyson. The hall was packed to its capacity

The Chairman articulated that Pakistan has consistently upheld the right of the people of Jammu and Kashmir to self-determination in accordance with the resolutions of the United Nations Security Council. These resolutions provide the pathway for the holding of a free and impartial plebiscite for the determination of the future of the State by the people of Jammu and Kashmir.

History tells us that attempts to forcibly suppress the legitimate demands of the people of Jammu and Kashmir have resulted in failure. Similarly, threats of use of force have not affected Pakistan’s resolve to maintain its position of principle. One thing is crystal clear that without an active interest of big powers to come to the rescue of Kashmiris, India will not agree to any meaningful talks on Kashmir. He urged the world powers to break their silence and help the people of Jammu & Kashmir as the situation there was brewing with anger, and it may erupt anytime due to uninterrupted and prolonged atrocities being committed on the Kashmiris by fascist Indian Prime Minister Narendra Modi.

The Chairman added that his purpose of coming to America is to increase awareness in the corridors of power in Washington about the Kashmir issue. His sole purpose was to mobilize world opinion in support of the cause of right of self-determination to the people of Jammu and Kashmir as well as the principle stand of Pakistan;.

The Chairman praised Prime Minister Imran Khan who pleaded the case of the people of Jammu & Kashmir at all international fora including the United Nations that Pakistan supports initiatives and efforts aimed to achieve a just and durable settlement of the Kashmir problem, in accordance with the aspirations of the people of Jammu and Kashmir.

Afridi Sahib expressed his resolve to interact with the elected representatives, civil society, members of think-tanks, academia to pursue forward the vision of his prime minister, Imran Khan Sahib.

He expressed his unconditional moral, political, and diplomatic support to the people of Kashmir for a just and peaceful solution to the long-standing dispute. He said that we stand shoulder to shoulder with our Kashmiri brethren.

Ambassador Dr. Asad Majeed Khan, Pakistan’s Ambassador toe United States presented historical perspective of the dispute and underscored the efforts made by the current Government towards resolution of the Kashmir dispute.

Speaking on the occasion, Ambassador Khan said that Prime Minster Imran Khan has termed himself as the Ambassador for Kashmiri people and has been effectively pleading the case for Kashmir at all international forums including the United Nations. He briefed the audience on the recent visit by the Foreign Minister Shah Mahmood Qureshi to attend the 76th Session of the UNGA in New York. During the visit, Foreign Minister along with President Azad Jammu and Kashmir and Chairman Pakistan Parliamentary Special Committee on Kashmir sensitized the international community on the plight of Kashmiri people and urged them to play their role in resolution of the Kashmir dispute as envisaged in the UNSC Resolutions and in accordance with wishes of the Kashmiri people.

Ambassador Khan highlighted that India’s illegal and unilateral actions of 5th August 2019 were in contravention to its international obligations, commitments to the United Nations and bilateral agreements and understandings between the two countries. He also drew attention of the audience to the grave peace and security threat posed by these Indian actions in South Asia and called for the international community to urge India to end its human rights violations in IIOJK and rescind illegal and unilateral actions taken on August 5, 2019.

Ambassador Khan also lauded the role played by the Pakistani and Kashmiri American community in highlighting the gross human rights violations in IIOJK and echoing the voice of innocent Kashmiris in the corridors of U.S. Congress. He stressed upon them to continue sensitizing the respective Congressman and members of civil society on this grave issue.

Ambassador Khan reiterated Government of Pakistan’s continued moral, political and diplomatic support to the people of Jammu and Kashmir in their struggle for right to self-determination.

Dr. Ghulam N. Mir, President, WKAF said Kashmiris cherish the moral and political support of the brotherly people of Azad Kashmir and Pakistan in fighting off the oppression unleashed by the Indian regime. We are grateful to the indomitable prime minister Imran khan for forcefully advocating the cause of Indian Occupied Kashmir at all international platforms, including his powerful speeches at the 76th United Nations General Assembly session on September 24, 2021. He continues to support our principled position that Kashmir conflict must be resolved according to the UNSC resolutions passed as far back as 1948. Kashmir remains one of the most important unfinished business items United Nations’ agenda.

Dr. Mir voiced his optimism that the political resistance in Kashmir is alive, despite the brutal tactics of Indian occupation forces. He emphasized that Kashmiri diaspora need to pursue the goal of right of self-determination as a united front. United we stand but divided we fall, Mir added.

Dr. Mir appealed to the world powers in general and the United Nations in particular to bring immense moral and political influence to bear on initiating a peace process which will lead to a speedy, just and honorable settlement of the dispute and restore to the people of Kashmir their inalienable right to self-determination.

Dr. Ghulam Nabi Fai, Secretary General, WKAF said that the United Nations bears a special responsibility to bring peace to Kashmir because it was in its chamber more than 74 years ago that India made a pledge to the world body in general and to the people of Kashmir in particular that they would be enabled to decide their future under an impartially supervised plebiscite on the basis of their unfettered right of self-determination. That promise has not been kept and in fact, has been repudiated in cynical violation of the principles enshrined in the Charter of the United Nations.

“No consideration of the Kashmir dispute which is designed to arrive at a peaceful settlement will yield any result unless the Kashmiri viewpoint is fully taken into account,” Fai emphasized.

Dr. Fai said that Kashmir conflict has many dimensions: Political, diplomatic, humanitarian, etc. But the goal of all these dimensions is just one: to have a greater understanding of world powers, including the United States to help us to exercise the right to self-determination as was guaranteed under UN Security Council resolutions.

‘Unfortunately, both Trump and Biden administrations favored India over the people of Kashmir. They made no protests at the United Nations Security Council over India’s violations of human rights or its plebiscite resolutions. They gave India a veto over any third-party intervention knowing it would be employed to the disadvantage of Kashmiris,” Fai said.

Dr. Imtiaz Khan, Professor, George Washington University Medical Center said the appointment of Mr. Afridi as Chairman of Parliamentary committee on Kashmir is very refreshing and departure from the inaction of the past. His dynamism and depth of understanding of Kashmir problem infuses energy into the role of Pakistan in furthering the Kashmir cause. The Kashmir committee was screeching and screaming for new leadership and under the chairmanship of Shehryar Afridi its horizons have broadened. Taking the issue to academic world and think tanks and involvement of the media are excellent ideas which will help to cause awareness of ongoing and unabated Indian atrocities in IOK.

Dr. Imtiaz underscored that the events of August 5, 2019, are consistent with the ruthless occupation and suppression the people of Kashmir have suffered under the unpopular Indian rule. All the features of severe political repression are evident — the detention without trial, torture, execution, the torturing of neighborhoods, imprisonment of leadership and gang rapes by the Indian army — are common daily occurrences. It is in the interest of world peace that India and Pakistan need to resolve the Kashmir dispute to the satisfaction of the people of Jammu and Kashmir.

Sardar Zarif Khan, Chief Coordinator of the event said despite the persistent and pernicious tyranny, the people of Kashmir never have nor ever will give up their right to be free. It is based on the internationally recognized, and principled stand.  The Kashmiri diaspora and its allies worldwide stand in solidarity with the people of Jammu & Kashmir. We stand in support of their unyielding struggle to resist occupation and achieve their right to self-determination.

Sardar Shoaib Khan, Coordinator of the event said that it was our duty to support the people of Kashmir who are struggling for their right to self-determination. Our objective is to draw the attention of the world powers to the situation in Kashmir and to exert pressure on the government of India and to resolve dispute over Kashmir and help stop human right violations in Indian occupied Kashmir.

Akram Butt, also a coordinator of the event thanked the participants for their willingness to be the part of this important event.

In the end, the participants called upon the United Nations in general and Biden Administration in particular to play an active part in ensuring that the promises made to the people of Kashmir at the U.N. more than seven decades ago, be fulfilled and an opportunity given to the people to participate in a free and fair referendum to determine their future in line with their inalienable right to self-determination.

Those who participated in the event include among others:

“Pakistan And Kashmiris Are Not India’s Enemies. We Wish India Well. We Need Closure. We Need Peace.”
June 23, 2021
I Saw Them Execute My Mother. I Was Eleven
June 21, 2021
Isolated, Bitter And Suicidal In Kashmir
June 21, 2021
Changing Language And Ethnicity: India On A Warpath In Kashmir
June 21, 2021
Global Reactions To Kashmir Crisis
June 21, 2021
Go to Top
We use cookies to ensure that we give you the best experience on our website. If you continue to use this site we will assume that you are happy with it.OkPrivacy policy